whole nation has today as a holiday! This holiday is also called May two-four, May long weekend, May long, and May run, but the official name is Victoria Day! If you don’t live in Canada you may not have heard of this before because it is only in Canada. Every year it takes place on the Monday on or before May 24. Last year it was on May 24, this year it is today or May 23, and next year it will be on May 21! It is usually celebrated with fireworks and lots of them and sometimes a parade. Many people go camping on the long weekend or go to a campsite to party and watch the fireworks. The holiday is in honour of Queen Victoria’s birthday and the current reigning Canadian sovereign’s official birthday. It is sometimes informally considered as marking the beginning of the summer season in Canada. If you would like to read more about Queen Victoria go to Simone’s blog. To see some cool facts go to Alexandra’s blog or Olivia’s blog.

What I did this weekend!

This weekend I did about two things that were kinda exciting! On Saturday I went to my friend Alexandra’s house for a sleep over! I was so much fun! Apparently there was fireworks but I missed them sadly! We took so many pictures for no reason! then on Sunday night I went to a bonfire where I finally got to see fireworks after I missed them the last time. I was hanging out with my friend Carly we had fun laughing at the high school kids! Now I am at home on Monday (today) just chilling! I had a pretty exciting May two-four weekend!

If you have seen my page Underground to Canada you would know that my class has started inquiry circles, where we

I am loving this book!

go in groups and read a novel together and have to write notes about the book. My group (Olivia, Alexandra, Jared, Simone and I) is reading the book Underground to Canada by Barbara Smucker with drawings by Imre Holfbauer. My teacher, Mr. Pepper has given us an assignment about what we are reading and disscusing in these groups. The numbered questions below is what we have to write about. Hope you like it!

1. Summarize the main events in your group’s novel after 3 days of Inquiry Circles.

Julilly is a 12 or 13 year old slave who has grown up in a fairly mellow Virginia plantation. She has never been whipped or treated badly, until a slave trader from Mississippi came to buy slaves and bring them back to a “deep south” plantation. The trader took Julilly away from her family along with many other children and three full grown men. She has to endure starvation, thirst and the blistering heat on the long trip to Misissippi. The “deep south” plantation is very different than the one that she grew up in. The slaves were treated like pigs with very little to eat, and if the masters thought that they were not doing their share of work the punishment was being whipped. None of the hundreds of slaves at this plantation were happy with the slave quarters falling apart at the seams, The exhausting heat without shade, everyone is hungry and thirsty twenty-four seven, mean while everyone even the elderly and “cripples” have to pick cotton all day long. No one talks at this new place, and the only person who talks to Julilly is her new friend Liza who has suffered too many whippings from Ol’ Man Sims.

Everything changes yet again when a large Canadian man named  Alexander Ross comes to the Riley plantation to study birds. There is much talk in Julilly and Liza’s hut about this mysterious land called Canada, under the north star where once you cross the boundaries you are free from being a slave! Ross then asks Ol’ Man Sims for two slaves to guide him. Could Julilly and Liza be the two slaves he chooses? Will Julilly and Liza’s dreams of escaping come true?

You can go to my Underground to Canada page for a brief over view of the entire book.

Round Characters: Characters we get to know well. Round characters have a variety of traits that make them believable.

Julilly: A 12 or 13 year old slave, who was taken away from her Mammy (Mother) and sold to a brutal plantation in the “deep south”.  She longs to go back to her Mammy and escape slavery by fleeing to Canada. The only things she can think about are not being whipped, this Alexander Ross fellow and escaping with Liza!

Liza: A “crippled” slave that has been slashed with Sims whip a few too many times. She also dreams of escaping but knows first hand the consequences of getting caught. She can’t help but think that Ross holds answers for her.

Lester: An adult male slave sold at the same time as Julilly. He always has piercing angry eyes, and is proud of Julilly for being so strong. He is also thankful that Julilly helped him during his time of need while they traveled to the Riley plantation. Lester like Julilly was taken away from his family.

Flat Characters: Important to the action, but not fully developed. Their function might be to show how the central character behaves or relates to others. Flat characters help make the setting believable. There are varying degrees of flat characters. For some, we will just hear their names. Others we will learn a bit more about.

Mammy Sally: Julilly mother who fist told her about Canada before she was sold. A strong, loving and tough woman. She lost her husband the day her only daughter was born.

Adam: An adult male slave sold at the same time as Julilly and was also taken away from his family. His is also set on escaping.

Ben: An adult male slave sold at the same time as Julilly and was also taken away from his family. Ben is not sure if he is going to escape or not.

Ol’ Man Sims: The fat overseer of the slaves, who likes to use his whip very often especially on the elderly and “crippled” He reports to Massa  (Master) Riley.

Massa Riley: The owner of the plantation, he doesn’t keep the slave quarters up to date and doesn’t feed his slaves enough.

Massa Henson: The owner of the plantation Julilly grew up on and wasn’t very mean to his slaves like Massa Riley is.

Alexander Ross: The new man in the story from the great, cold land called Canada. Ross is an ornithologist at the plantation “to study birds.” A few of the slaves hope that he can lead them to Canada.

Barbara Smucker is a great author, she describes her characters by using that characters actions, speech and thoughts, and other characters comments. An example of this is how she described and introduced Liza: “…sullen, hunchbacked girl” This immediately makes you think that she has been injured in some. Barbara also has another slave say “Too many whippin’s” This comment about Liza makes readers think that she has done something to make Sims very angry and whip her quite a lot. A little later in the novel Liza says “My back is givin me misery” This now makes me think that the whipping were very very painful especially when the pain has stayed with her for so long. Barbara is great at describing settings, characters, etc. I really like how she writes.

3. Choose an event in the story that you feel is important. Describe what happened. Why do you think the author had this happen at this point in the story? Don’t forget to include the characters introduced so far, the setting and any other important information that will allow your blog readers to gain a deeper understanding of the story.  If you had been the character involved in this event, how would you have reacted to the event?

The event that I choose was when Alexander Ross first came to the plantation. This was of course after Julilly was sold and had befriended Liza. Ross came one afternoon while the slaves were picking cotton in the field. When he showed up there was a hush in the field as the work slowed so the slaves could hear what the white folks were saying. Massa Riley was explaining to Sims who and why Alexander Ross was there. Julilly was picking just a few feet away and she could hear every word. When Massa Riley said that Ross was from Canada, Julilly had hope because her Mammy had told her about the foreign place. When they were finished talking Ross went to pick which slaves would help him in his search for birds. Then Sims yelled at the slaves to get back to work and whipped Julilly once, he was about slash at her again but Ross stopped him. I think that Julilly felt grateful, surprised and found herself kind of starting to trust the Canadian. I think that if I were Julilly I would have felt the same way because I would have expected to be whipped more than once by what I had seen earlier. I would also be shocked that a white man had saved me! Especially if the man was from Canada, the place where slaves were free!

I think that Barbara Smucker made this event happen at this point in the book because Julilly and Liza had been talking about Canada the scene before, so it made sense for a Canadian man to come into the story. That would make readers think that he will be the one to help Julilly and Liza get to freedom!

4. Predict what you think is going to happen next in your novel.

I predict that Alexander Ross will pick either one of the girls or both to guide him. I also think that Ross isn’t really at the plantation to watch birds because he is so nice to the slaves, I think he will help at least a few slaves be free. I’m not sure if Liza will be able to travel that far because her back but I hope that she can! I also think that Julilly will meet up with her mammy at some point!

Your votes have been counted and I have seen that most of you like my wooden, Harry Potter theme the best so I have changed my theme to this. If you don’t like this theme you can still vote on which theme you like or give me sugestions on what I can do to improve my blog. I hope that you enjoy my new theme! 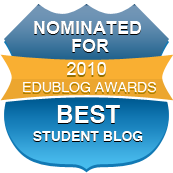